The NWSL Regular Season has officially started!!!! Nashville has opened the largest soccer stadium in the United States!!!! Washington Spirits have withdrawn the ring of champions!!!! These eventful days don’t happen every week, so let’s hurry up and make the most of it in the new episode of It’s Called Soccer.

prospect of the week

A five-foot central defender who wins free kicks and marks them this way? And it’s also a class of 2004? Consider me interested.

The talent of the week.

First goal in MLS for the 2021 SuperDraft’s first overall pick, and it comes from some of the best-constructed team-level action of the entire soccer weekend.

The overreaction of the week.

SKC WILL WIN THE WOODEN SPOON

Vermes opens his press conference with a statement about Gadi Kinda:
“Gadi Kinda will be out for the 2022 season.” #SportingKC

And he would be there even after eleven years of virtually uninterrupted contention at the highest levels of the league. Of course, doing it because two of your designated players are out for the season due to injuries isn’t the best thing to do.

The prizes of the week

And if you perceive a negative tone in the definition, the problem is yours. Whoever speaks to you has a special place in his heart for American women, and that place is even bigger and more comfortable if they serve to celebrate the union successes of a professional sports category, also economically far from being secure like that of soccer players.

It cannot be said that they are not right. Las Vegas is America’s new sports paradise and everyone wants to get their hands on it.

If you’re a Philly fan, it’s hard to think of a better opportunity for your new DP’s first goal. If you’re a Nashville fan, it’s impossible to imagine a worse start in their new stadium.

5 – Trapping in the Eastern Conference

A tight one at the top of the Eastern Conference standings. pic.twitter.com/61LO4RX2LM

Ok, this is a pretty absurd statistic: there is a greater distance -ten points- between LAFC, which commands the Western Conference, and Houston, which occupies the seventh and last place available to qualify for the postseason, than between the first and the last of the Eastern Conference. And since we’ve entered that phase of the season where the trends are starting to get substantial, we’ve got the impression of an Eastern Conference that’s going to be decidedly competitive, even more so than last year, given that Cincinnati and Miami no longer seem like the mattresses. from last year.

4 – This corner kick defended by Charlotte

He brought up all 10 outfield players with a corner kick in the first half, when you’re looking at the fastest player in the league, right? Bold strategy, Cotton. pic.twitter.com/sUnZSkkl24

We are in the first half and yet Martínez sends ten men to the attack, leaving a counterattack to the fastest player in the league, Ruan, who has already scored a goal. It’s fine that the structure of MLS encourages you to look for risky plays, but you might overdo it.

Third player in league history, first youth academy player and youngest to achieve this milestone, to score within the first minute of his first MLS game.

2 – The double pole of Chicha Arango

🤯 Incredible what happened in the game of #LAFC

😱 Arango shot, the ball deflected, hit both posts, but did not enter. pic.twitter.com/WlW8VzZS0p

An incredible move that surprised everyone: the commentary in Spanish reacts as before a goal scored, the teammate finds the ball in front of him and can’t do anything but shoot high, Chicha asks for an unidentified hand. No one understood anything about it.

1 – The parking lot at Geodis Park

Sorry, but Nashville SC easily wins the “most interesting place to park” award in MLS. Literally on a race track. I like this. pic.twitter.com/YztEREkHZi

Why build expensive parking lots that are just a black hole that steals space and money when you can use the car park around the stadium?

Critics’ Choice Award for Drunk Game of the Week

The quiz of the week.

In this excellent game situation, what will Brenner do? 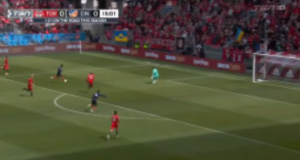 C – He will do something in the middle, neither a shot nor an assist that will gradually end in a goal kick

The correct answer is: unfortunately, and I’m sorry that it’s really turning into something of a red cross shot, solution C.

The question (and perhaps the answer) of the week

Is MLS’s strategy for broadcasting MLS Next Pro matches proving to be a mixed bag?

Real Monarchs push to produce their own stream for home games https://t.co/sMNkcVfOg5

I would say yes: many franchises are unhappy and over the weekend Real Salt Lake had the opportunity to personally produce the Monarchs game, bringing together the commentary duo that has accompanied the franchise in the USL for the past few seasons. In all this mess, however, a new opportunity could arise for the league, making the Next Pro a truly interesting and well-presented show.

The MVP of the week

A goal and an assist, all of the highest quality. Make a name for Qatar, because it is difficult for Canada to deprive itself of its presence.

The romantic MVP of the week

With Reese Witherspoon -the new minority owner of Nashville- in the stands of the brand new Geodis Park and a sea of ​​yellow, between smoke bombs and fan shirts, I couldn’t pass up the opportunity of a reference to one of the pillars of the repertoire of the american actress.

parade of the week

Andre Blake made an unreal save against Nashville SC 🤯 pic.twitter.com/scOfwtApWP

Ok, you have to explain this to me because I don’t know where to start.

The most boring goal of the week

Good assist from Jun Endo, protagonist of the game with up to one goal, but we could have done better. yawn.

The best goals of the week

Now we start to score from the center of the field, but tell me if you think about the way.

Here is another one, never banal, it should always show off. But what are we going to do with these children today?

I can’t decide between Jesus Ferreira and Alan Velasco

That he can not do?

Pomykal to Arriola to Ferreira, literally as Nico Estévez put it. pic.twitter.com/QY9BTY08fQ

My royal partner this MLS season put his signature in the tie against Kansas City with his third musketeer Paul Arriola, who provided a splendid assist to his international partner.

Best assists of the week

North Carolina tried to crash the party in Angel City but with this header from Debinha it only came close. However, one of the best games of the day.

Derrick Etienne makes it 2-0 to @ColumbusCrew in the first half! pic.twitter.com/NiMv11b06D

The Columbus native isn’t always rock-solid and flawless, but he’s one of the best passers in MLS, and he’s a big factor in the build phase, especially since he has a foot that’s a catapult.

🚀💥 Ashley Sanchez delivers from outside the box!!!

A lightning quick, almost imperceptible strike, it didn’t even seem like a heel strike to be honest, but it makes all the difference in giving Ashley Sanchez the space and time to get the cannon into action.