The Seattle Sounders presented their hometown crowd with that little trophy they won a couple of weeks ago when they returned to see something of a league thrashing. This and much more in the new episode of It’s Called Football.

prospect of the week

We left the shores of the MLS Next Pro and spent a week in the USL where there are still a few second MLS teams left. Among them the Red Bulls, in which this weekend he scored a decisive goal – his first among professionals – the class of 2005 Illia Tyrkus. A name that has come up recently, Tyrkus may be gaining more and more importance within New Jersey’s small sire list.

The talent of the week.

The Colombian born in 2003 arrived at the lake with high expectations. He has struggled to establish himself so far, but his first MLS goal could help him unravel, and it would also be important because Chicago desperately needs support up front.

The overreaction of the week.

After a few weeks in which we saw more 0-0s than usual, this weekend the crazy games are back, so much so that in the dedicated category a few lines down I had a hard time narrowing down the options in the race. For example, above you will find only an honorable mention.

The prizes of the week

So the Union made a pre-game video where 3 players try to draw the opponent’s club crest, and Nathan Harriel drew a trash can and wrote “Red Bulls” on it.
I won’t lie, I laughed

More than between Red Bulls and Union, the rivalry here seems to be between New York – or in any case New Jersey – and Philadelphia. Fun fact: Before Philly came to MLS, the organized cheerleading group Sons Of Ben already existed, but instead of cheering someone on, they went to follow the New York Red Bulls just to stir up trouble with the New York fans. York.

A bit of Cruella Demon, a bit of Marco Castoldi aka Morgan. The Ecuadorian with this half and half cut instantly became a perfect cartoon villain.

St. Clair definitely got a big chunk, but Ruidiaz has the first league goal of the year. pic.twitter.com/0eWyRlwOhz

Until yesterday, the Canadian goalkeeper from Minnesota had faced four penalties among the professionals, and had saved four. The solution to defeat him? He throws the ball very, very hard and at a very, very angle in hopes of scoring or at least spraining your wrist.

Nothing like a good network at the end, even more so after ninety minutes of nothing or almost nothing.

4 – The Covid situation in NY/NJ Gotham

We thought we had finished that era, but we have postponed games again due to Covid. The pandemic is not over yet.

3 – The sorrows of Colorado

The leaders of the Western Conference made the trip to the heights hoping to continue the streak, but were slowed down by a disastrous first twenty minutes in which they conceded two penalties. And yes, okay, only one was scored, but thanks to McCarthy who, as a substitute goalkeeper, found himself at the starting point and saved his team for a long time, even going so far as to guess the direction of two penalties from two.

It is quite absurd that in a team of this level there is no designated penalty taker and that Toni Pressley has to step in to pull the chestnuts out of the fire. Luckily for him and the team he scored, but the signal is not the best.

What to say. We have highly praised the defense of the Fire and the leadership of the German. It was logical that he ended up like this.

Critics’ Choice Award for Drunk Game of the Week

The result is enough to understand why. In the end, no matter what happens elsewhere, if a team scores seven goals and concedes more than one, they can’t help but finish in this table.

The quiz of the week.

Why is Jesús Ferreira the only person in this painting?

A – because it was taken after the game

The correct answer is b.

The question (and perhaps the answer) of the week

Is Estrada’s heel wanted or involuntary? And should it count as assists?

I would like to say that the movement is voluntary. But the touch is perhaps too light, so little that I don’t even know if it is. At the MLS level, it matters little, given that hockey assists count as assists and thus Gressel has been recognized for passage work, but how would one behave in those situations elsewhere?

The MVP of the week

Two goals and two assists. Well, it was against Kansas City. But even considering the quality of the plays, it’s hard to find someone capable of beating him.

The romantic MVP of the week 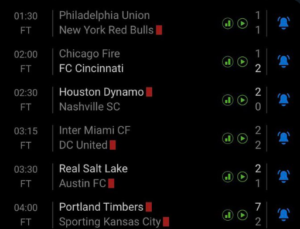 Look here what wonderful photos. I am almost touched.

parade of the week

Erin McLeod with the great save at the end of the first half🧤#ORLvKC | 0 – 0 pic.twitter.com/4yrITGmTsE

The most boring goal of the week

The best goals of the week

Thiago Almada is a little devil

This child is SPECIAL.

Thiago Almada with a beauty to @ATLUTD! 🔥 pic.twitter.com/p7oeHi49Vb

And its impact in MLS immediately made the hearts beat slower of those who feared a new Barco effect.

Christen Press against the universe

It is his first regular season goal for @weareangelcity!#WASvLA | 0 – 1 pic.twitter.com/W0qVadtROM

Try to stop it. Spoiler alert: you won’t make it.

Where did he get the strength to kick Roldan like that?

I don’t know. But one thing I do know is that if you are against her presence in the USMNT, I am ready to challenge you with my own hands.

Best assists of the week

After a rocky start to the season, the class of 2003 is starting to find production, and it’s no accident that they’ve recently come to the fore when it comes to #DualNationalPanic.

One of the least expensive and least discussed Argentine imports since the start of this new wave, but potentially one of the best performing yet. Another great Montreal deal.

But what is this ball? Incredible play, in the narrow, with ten centimeters of window. He is not always continuous and dominant in the ninety minutes, but when he turns on the Argentine he is unplayable, and not only at the MLS level.