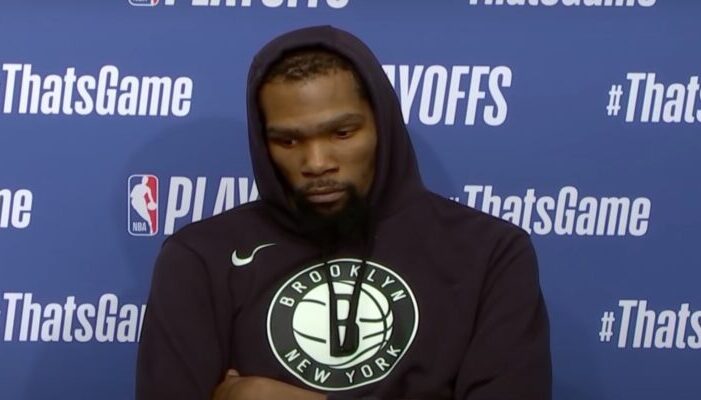 Kevin Durant is in a particularly precarious position in this first round playoffs, with mediocre performances and a sweep in sight against the Celtics. In addition, in the face of this crisis he received a lot of criticism, and some even questioned his titles.

Everything goes very fast in the NBA, maybe even too fast. And in these playoffs, it’s the reputation of Kevin Durant what seems to be at stake, while his track record should speak for him. Even in the event of a humiliating elimination against the Celtics, he remains a double NBA champion, a double Finals MVP and, above all, one of the best attacking players in history, so many elements that lean in his favor in the all-time hierarchy.

The problem is that in the face of Boston’s defense, in the face of Jayson Tatum’s aggressiveness on him, the Nets’ No. 7 is in big trouble and going through an offensive crisis at the worst of times. In the series, he only has a 36% success rate, far from his regular season standards. For a long time he has been considered the best player in the world, today he is the subject of much ridicule and criticism.

And on the set of the show Inside the NBA, Charles Barkley has done more than question KD’s place in the current league. While the All-Star he is clearly considered one of the top 10 players of all timethe star consultant put him in his place claiming that he was simply a product of the Warriors’ dynasty and that his titles weren’t worth much after all.

I don’t mean to be mean to Kevin Durant, but everyone is always talking about titles, so I’ll tell you again: I’m not interested in every passenger on the bus. If you’re not the bus driver, you can’t strut your stuff and think of yourself as a champion. If you’re a passenger, I don’t even want to listen to you. All these guys brag about their titles but have done absolutely nothing.

When you are the driver of your franchise, all the pressure is on your shoulders, you have to play well so as not to receive an avalanche of criticism, it is totally different. And for now, what happens when Kevin Durant gets behind the wheel? He lost in the Finals. And he could have been MVP with Golden State, he wasn’t the best player. Iguodala was MVP, is he better than Curry?

For Charles Barkley, Kevin Durant is not material for a leader, or “bus driver”, as he likes to say. Whether in Oklahoma City or Brooklyn, where he was/is the undisputed and undisputed No. 1, he has never managed to win a title, worse still, he never participated in the Finals in this role except in 2012. And it is not this year that the trend will be reversed, barring a miracle.

Kevin Durant he’ll have a lot of trouble getting his Nets back in this series, but he should at least salvage his honor and a bit of his reputation by avoiding the sweep. Even if in any case, everyone seems to have given up.