MLS: historical notes and contradictions. Let’s talk about football, but this time about overseas football, how it is conceived and above all how FIFA behaves towards it.

The news came a few days ago: the CAS of Lausanneor the Court of Arbitration for Sport, issued a phrase to say the least historical: “Since FIFA is the governing body of the different football federations in the world, it has the right and the duty to decide for them, including the American one”. The spoken words are more or less these, but What do we mean? What should FIFA decide regarding MLS (Major League Soccer)?

First, let us specify that the american championship is very young. In fact, it was born in conjunction with USA ’94, the first World Cup in history organized by the United States. FIFA then forced the host country, which was not yet equipped with a professional league, to create one. Thus, after the World Cup, the Major League as we know it today comes to life two years later. It is a professional football league, in which it is expected salary capi.e. the maximum salary cap for players purchased and all contracts are supervised by the central federationsomething that does not happen in other places, for example.

But what is most striking, and this is where FIFA and the CAS intervene, is the relegation and promotion system that, even today, does not exist in MLS. Yes… In fact, the football championship is based on the franchise and congress system, like any other American championship. This means that there is no single group and the teams do not generally meet in home-and-away matches.

We have Eastern and Western Conferences and the first 4 of each collide at the end in the Play-Offs, which determine the winner. The championship is essentially closed, as the teams have always been the same for years. New deductibles are introduced, in fact, on the basis of market studies on the city that is “candidate” in a certain sense, to accommodate the deductible itself.. This is how, for example, David Beckham created a team from scratch, Inter Miami FCwhich is preparing to debut in March. A franchise can also move from one city to anotheras has already happened in basketball: in fact, the Lakers have not always been in Los Angeles.

Who plays in the MLS?

The problem of promotion and relegation does not seem to affect MLS. In fact, theirs is a proven system, which allows you to have a level championship, without huge disparities and with many twists and turns.. In 26 years of history, it is not never verified that the final victory was always the prerogative of the same four teamsas it happens in the European championships. But neither have modern fairy tales, such as those of Naples and Sassuolo, ever been produced.. Also, there is no exchange with players from other leagues, who normally only go to MLS at the end of their career. Beckham, Pirlo, David Villa and recently Chicharito Hernández have done it.

In fact, in MLS, soccer players are mostly American or Mesoamerican. Also, thanks to the draft system, every year young talents are discovered from college who are quickly placed on various teams. What? You take the final ranking and reverse it, so that the weaker team passes the stronger player, even if you’re allowed to switch places to get the player you want. Do you know they also do an All-Star Game?

However, after all these historical clues, we must say that FIFA has not always used an iron fist against the American federation. For years, complaints have been collected from team presidents and other pundits who want change. Gianni Infantino, president of FIFA, during an interview with Trump, said that he could not do anything. If MLS didn’t want a European-style system, then that would have been the case. And this is where the TAS comes in. 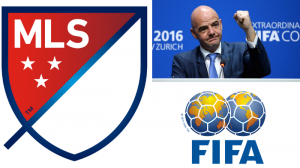 According to the Lausanne court, indeed, FIFA has this power and must use it. Not to mention that The USA already obtained the loan for the 2026 World Cupin collaboration with Mexico and Canada. Therefore, it is likely that by that date, MLS will have to “regularize”. But whenever FIFA intervenes.

FIFA, an irreproachable body that also through the voice of President Infantino has said many times that football should not be elitist, so much so that it would like to open the world championship to more teams. Ironically, Qatar 2022 will be the last edition with 32 entrants and USA 2026 should have 48. It would be a bit strange to open up the world championship to many teams, but have one host country close it, wouldn’t it?

We will continue to monitor the situation, especially whether FIFA will decide according to consistency or according to increasingly harsh commercial law.