Italian protagonists in the 45th edition of the International Youth Tournament Sub 18 “Città di Firenze” that enters its final phase. The wind bothered the players a bit but the beautiful sun brought many people to the stands of the Cascine club.

In the men two blues in the semifinals. Lorenzo Ferri beats the Swiss Andrin Casanova by 61 16 61 while Federico Bondioli beats the Slovenian Matic Kriznic by 63 64. To win the final, the Piedmontese Ferri will have to beat the Serbian Branko Djuric (3) who after under 15 Cinà defeats the marathon runner , a little tired, Niccolò Ciavarella by 64 62. In his place, Bondioli will have to overtake the Swiss Manfredi Graziani who is good at stopping the race of the Czech Kalina by 64 62

“Being able to play an international youth tournament in Italy again is really important and for that we thank the Florence coach who managed to organize it even with great difficulties – says Giancarlo Palumbo, national under-18 coach for men and women – the group is growing and these results also show that we have several arrows in the bow to make Italian tennis continue to grow.”

In women’s Federica Urgesi is good beating Serbian Obradovic by 75 64 and now the Blues will face number one Evialina Laskevich, who plays without a flag, who beat home favorite Anna Paradisi by 63 63. “It will be a difficult match but I’m fine and being able to find the rhythm with this wind is proof that we must always be careful -says Urgesi- my goal is to play the junior slams after the Australian Open point at Wimbledon “In the lower part Georgia Pedone, number 3 of seeded, qualifies for the semifinal wearing a truly impeccable tennis even with many gusts of wind.The Sicilian tennis player beats the Polish Lipiec 62 63 and will now face another Pole Olivia Bergler, coming from the qualifiers, who beats the English Mc Donalds for 75 63.

Easter Day (April 17) will be a Sunday of great junior tennis at the Florence coach with the women’s semi-finals to be played simultaneously at 10.30am while the men’s semi-finals are scheduled to start at 3pm. Followed by the final of double.

The doubles tournaments are also underway, which will conclude on Sunday, April 17, with the couple Evialina Laskevic and Ella McDonald as favorites in the women’s draw in heads of series against Brockmann and Lanz while Pace/Urgesi in the lower part. will challenge Bergler Varul. . In the men’s Djuric-Schwaerzler against the blue duo Bilardo and Gandolfi while in the lower part Ferri-Pereira against Bondioli-Romano.

The Press Trophy was also very popular, with journalists taking part in a padel tournament on the two fields next to the Sferisphere in the heart of Cascine Park. The event was sponsored by Ussi (Italian Sports Press Union) and after an eliminatory round the final was disputed with the affirmation of the Tatti-Trifoni duo over Tenerife-Mazzetti, third place for Di Ferdinando-Montaleni against Canino-Bernardini in the final tiebreaker

The tournament director is Giovanni Del Panta while the referee of the event is the expert Sebastiano Cavarra. 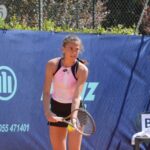 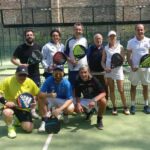 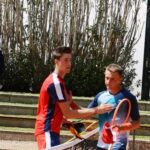 During the event, access to the tournament will be free and it will be a great opportunity for the many fans to see the future world tennis champions live. The Circolo del Tennis Firenze 1898 is located in the green lung of the city, inside the Parco delle Cascine, with its centuries-old tradition and above all a place where it is pleasant to be able to follow fun and exciting matches. According to the new COVID regulations, the capacity of the plant will be 100% but to access it will be necessary to access the basic greenpass and FPP2 mask as in the stadium.

The winner of the women’s tournament will receive the 2nd “Rhoda De Bellegarde di Saint Lèry” Trophy. The recognition was established in 2019 when Rhoda De Bellegarde was a Florence Tennis Club player and the first Italian champion for two consecutive years. Her greatest commitment was her social one, which saw her as a volunteer, as a Red Cross nurse, on the front lines during the First World War. Subsequently, she was sent to the Stigliano hospital where she contracted the terrible “Spanish” flu, she died very young at the age of 28. For her commitment during the Great War she was awarded the Silver Medal for Military Valor.

All news from Florence