From Monday May 9 to Sunday May 15, Rome will be the world center of tennis. In fact, these days the International Tennis Rome 2022, the historic tennis tournament in the Capital, which is already in its 79th edition, has begun on the courts of the Foro Italico.

The Internazionali di Roma have yet to get to the heart of the game, with the big players taking the red pitch at the Foro Italico next week. In fact, in this first part, the fourth day of the pre-qualifications is being disputed with male and female individual markers of 40 players each, in which players emerged from the open BNL tournaments played in recent months in all the regions of Italy. , altogether, to 12 athletes and 8 athletes reported by the National Technical Sector of the FIT. These markers will give access to the IBI 2022 thanks to the allocation of 2 wild cards for the men’s main draw and 4 wild cards for the men’s qualifier and the same number for the women’s qualifier.

The men’s and women’s finals of the tournament will be played on Sunday, May 15.

Despite some physical problems, Rafa Nada, emperor of Rome, will participate in the Roman tournament with 10 successes (record and last win last year) obtained on the Pietrangeli field. His compatriot and world tennis promise Carlos Alcaraz (18 years old) was also present. Nor will the controversial Djokovic, Medvedev, Zverev and Tsitsipas be missing. For the women present, Swiatek favored the final victory after the success of Roland Garros 2020.

Russian and Belarusian athletes regularly participated in the tournament. 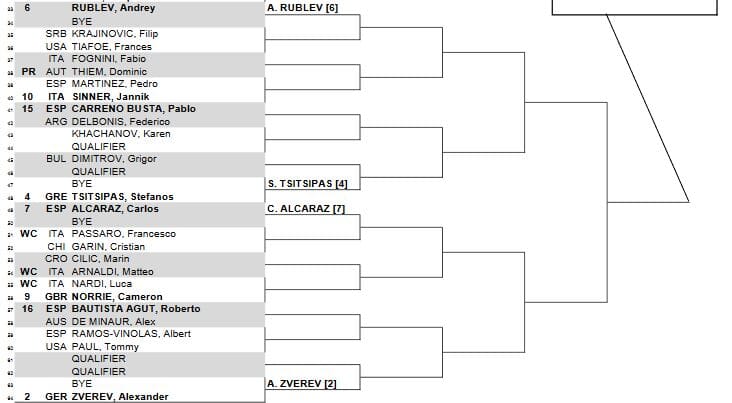 There are six Italian tennis players who will participate in the Rome Internationals. In fact, in the main draw we find Musetti, Cobolli, Sinner, Fognini and Sonega among the men, and Camilla Giorgi among the women. Matteo Berrettini, Roman tennis player and Italian tennis world champion will be the great absentee due to the operation on his right hand after the injury was repaired in Miami.

The Foro Italico is about to sell out. After two years without an audience, in fact, the stands have reopened and people are on the hunt for the remaining tickets. For the final on May 15, the price of tickets varies from 232 to 1,045 euros.

Where to watch the Internationals

The Internazionali di Roma 2022 matches can be seen live on Sky on the Sky Sport Tennis and Sky Sport Uno channels and broadcast on NOW TV. One match per day will be broadcast in clear on the Mediaset Italia 1 and Canale 20 channels, while a second match for the men’s scoreboard can be seen in the afternoon on the SuperTennis 64 digital terrestrial channel, which will broadcast the women’s matches live, such as the WTA rights holder.