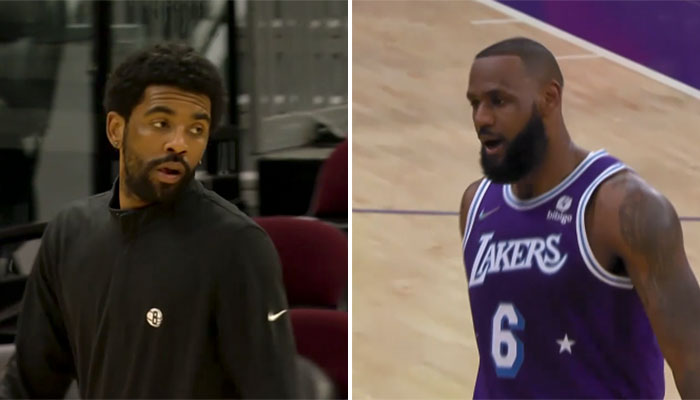 Before joining Brooklyn in the summer of 2019, Kyrie Irving made sure to make some deals with the New York leaders. One of them referred in particular to his role on the field, and was inspired by that…of LeBron James in his teams!

For years now, their careers have come together on a regular basis, whether they like it or not. Kyrie Irving and LeBron James have such a common history that they often see their names juxtaposed in NBA discussions. sometimes it will be through rumors around a meeting like the last days. The rest of the time, they are the ones who trigger this phenomenon.

It is not uncommon for one of them to mention the other in their speeches, either publicly or behind the scenes. For example, the Nets point guard sent a great message to his former teammate recently. Before that, when he joined the Nets in 2019, he had raised the King’s case with his superiors, and for a very specific reason.

Kyrie Irving and his penchant as a LeBron-worthy GM

in the columns of HeavySteve Bulpett revealed the dark side of Irving’s arrival at BKN, revealing that the latter made an immediate deal with the front office.

When Kyrie signed as a free agent, he basically said, “I’m here and I’m going to bring Kevin Durant back. In exchange, the Nets agreed to let him have a say in roster decisions.

So far, nothing too surprising. In recent years, the league’s superstars have had an impact on their franchise movements. A net gain in power that some attribute to Lebron James… of which obviously Kyrie Irving. In any case, Uncle Drew took an example from the leader of the Lakers to get royal treatment on his new team!

It’s still common for GMs to talk to team stars about possible trades and free-agent signings. It’s just smart. You are paying this guy dearly and you want him to be in line with sports policy. This guy might even have another perspective on a situation or a player you hadn’t thought of. But with Kyrie, they agreed to that before he came. He wanted a situation like the one LeBron has, or thinks he has LeBron.

It seems that Irving won the case, since he would have had a role in the arrival of James Harden just over a year ago. Some will consider, however, that the star point guard is endowed with too great an importance in Brooklyn, allowing him to miss two-thirds of a season without being threatened. As far as he was concerned, Kai would have been wrong not to try!

Perhaps jealous of LeBron James’ omnipotence during their joint tenure in Cleveland, Kyrie Irving demanded that power on the fringes of his signing with the Nets. Unfortunately for him, however, it is Kevin Durant who is now running the franchise!