Almost a year ago I read the article “How the Baltimore Ravens blitz” taken from the book “The Playbook” by Alberto Cantù and Michele Serra (Vol. II on sale August 25), focused on a tactical theme that always fascinates, perhaps because of the sonority of the name or perhaps because of the identification with the players who “catapult” towards the opposing quarterback.
Alberto and Michele explained very well the main tactical peculiarities of the blitz and how Martindale and Harbaugh have embraced this philosophy and adapted to the available staff.

Today, however, we are expanding the range of action within the entire 2020 NFL defensive landscape in a similar way to what was already done in the Play-Action article. As always, we start from a quantitative analysis, however See which teams in the last season have used the blitz the most by helping us with the following graph.

The blitz rate, on the horizontal axis, indicates in percentage how much a team has used the blitz (calculated in passing plays), while with the classic vertical red line the NFL average.

As a trainer imaginable, Martindale has kept the premises and so has this year. the Ravens had the highest blitz rate in the league, with about 45%. Behind them the Delfines de Flores in second position, followed by the Steelers and Cardinals.
Instead, the Colts and Chargers called for a totally different defensive approach, which we find on the left side of the chart, with percentages under 20%.
Indianapolis, led by defensive coordinator Matt Eberflus, played a 4-3 defense that was very conservative and focused on zone defense, pressing mostly with just four players. Almost 500 snapshots: 1st in the NFL. In this system, the pass rush should work best, trying to get to the opposing quarterback right away. Here will weigh the choice in the first round of defensive end Kwity Paye, Michigan’s 21st overall. He will have to make his contribution immediately, given the free-agent departures of Denico Autry and Justin Houston (Titans and Ravens).

If Eberflus continues to lead the Colts’ defense for 2021, we have a defensive coordinator change on the Chargers. Gus Bradley leaves Los Angeles after four years to marry in Las Vegas and reunite with Jon Gruden.
In his place comes from Denver, Renaldo Hill, but the real revolution is at the top of the pyramid of the coaching staff, where Brandon Staley is appointed as the new head coach, who after the fantastic year leading the defense of the Rams changes . “Naviglio shore” (As they say in Milan). Staley and Hill already worked together in 2019 with the Broncos, when the two coached at outside linebacker and defensive back under Vic Fangio. It will not be easy to repeat what we did with Donald, Ramsey and colleagues, but the Chargers could play again for a place in the top-10 with the definitive consecration of Joey Bosathe great return of Derwin James and reinvigorating the first rounds of 2019 and 2020, Jerry Tillery and Kenneth Murray.

Many pages have been written in recent months about Staley’s defense, about the variety of fronts and coverage used. On the surface, the Rams relied on formations that included two safeties and showing up before the snap with a particularly light box. The old saying “the apple never falls far from the tree / coach tree” is confirmed. Indeed in the following graph we can see which teams have mostly used 6 or less men in the area. Leading the league are Fangio and Staley. Note that this is a pre-snap situation, and in many cases, one of the two safeties rotates into the box as the action progresses (second in the NFL). 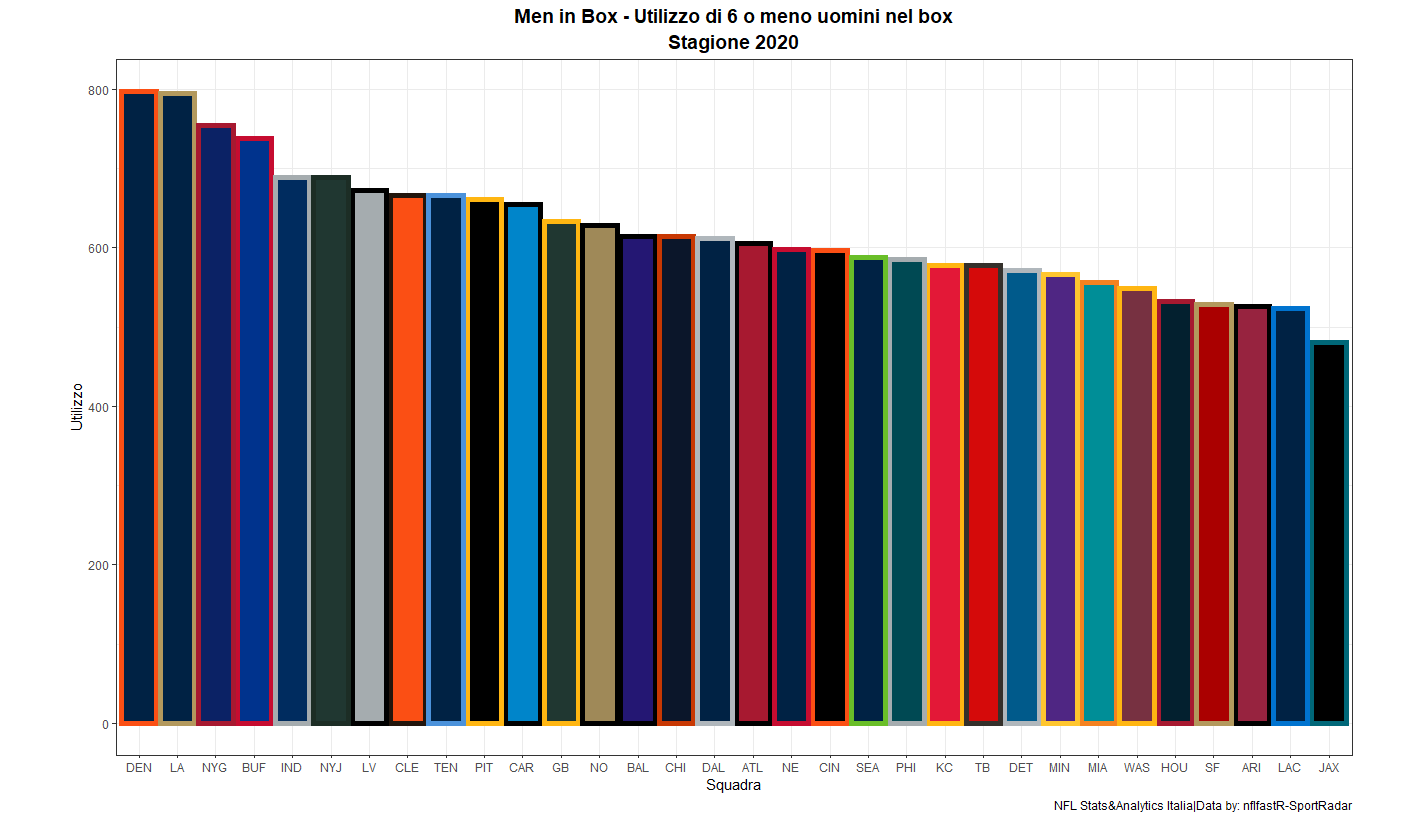 In the Rams the use of the blitz was done in a balanced way and not excessively, but it was effective. In fact, going back to the first graph we can see that among the teams that had the best ep/play when they blitzed (as opposed to the attack, the more negative the better) are “strangely” Washington, Pittsburgh and the Los Angeles Rams (The best in the league ). The red horizontal line indicates the average of the NFL where several teams orbit, while the worst are the Lions, Jaguars and Browns.
If Detroit and Jacksonville can easily be included among the worst 3 defenses in an absolute sense, there are some teams that underperformed when they brought a blitz.

In the following graph we see the subdivision between the EPA generated with the blitz, vertical axis and withouthorizontal axis, while the oblique line divides the two situations.
When a team is close to the line it means that the performance was similar, both with and without blitz, on the contrary if we move away this represents a greater discrepancy. 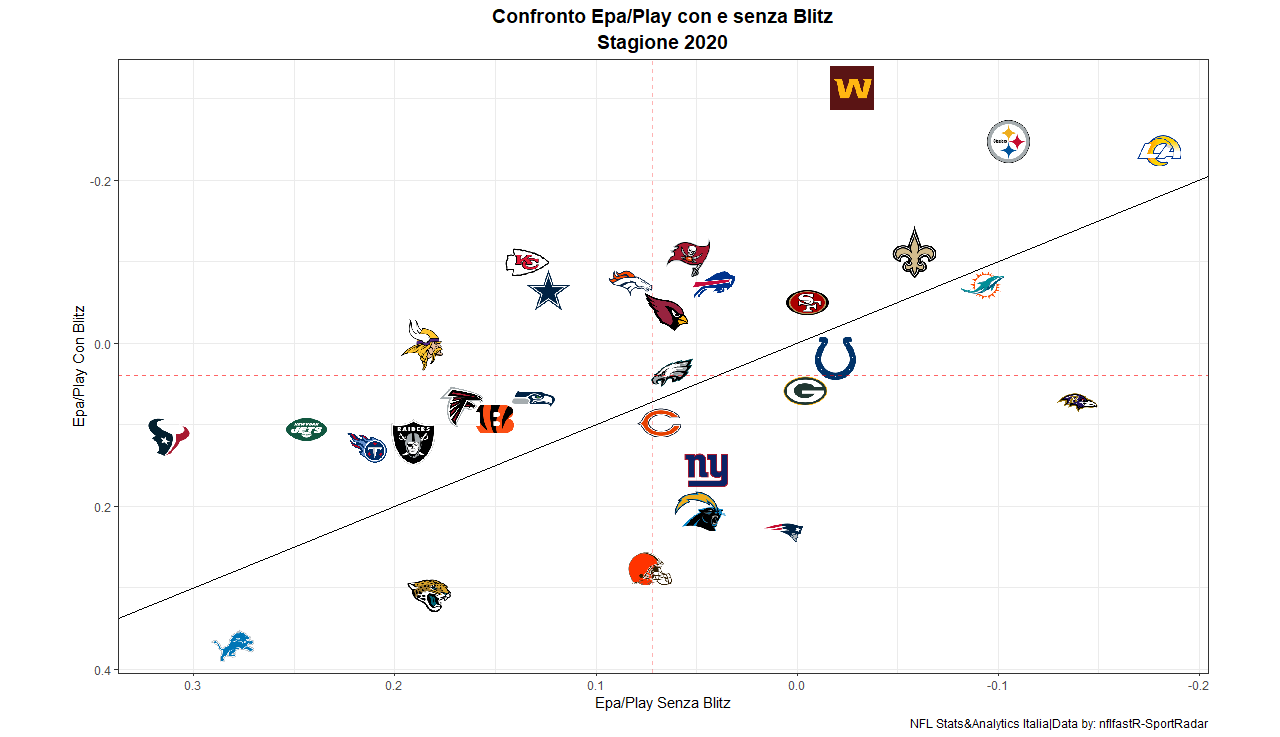 So if for Rams, Saints, 49ers, Eagles, the defense behaved similarly in the two situations, we can see how Ravens, Patriots and Browns all underperformed when they blitzed.
The Browns will once again be led by defensive coordinator Joe Woods, who will have an excellent secondary. John Johnson III and Troy Hill were added via free agents. Greedy Williams (Round 2, 2019) and Grant Delpit (Round 2, 2020) are returning from injuries and were drafted 26th overall with Greg Newsome.
General manager Andrew Berry not only developed the secondary, but also worked in the other defense departments, bringing Jadeveon Clowney, Malik Jackson, Anthony Walker and Owusu-Koramoah (Round 2) to Cleveland. At this point, it will be interesting to know what version of the Browns defense we’ll see this year. Whether 2020 with just 4-2-5 and 4-3-4 formations and a few blitzes or one marked by increased use of dimes and blitz formations, relying on the higher quality of the current secondary. When Woods was a db coach in Denver, dime lineups were used about 400 times compared to 16 last season.
Baker Mayfield could also have a lot of support from his defense this year.

If 2020 was a particular year for everyone due to Covid, it was even more so at Patritots, in its first year without Brady. The personal feeling is that 2020 was the classic year zero, or maybe even minus 1. Aggressive free agency and the first-round pick of Mac Jones only reinforces my idea. In defense, in the seven forwards, Judon, Van Noy, Godchaux, Anderson, McMillan (already in IR) and the return of Hightower arrived. The intention is clear to give discontinuity to last season and continue the path of growth of the young Winovich, Uche, Bentley and Jennings. I expect a throwback in a revised version of the Patriots 2019with a much heavier staff employed (100+ snaps with 7 db in the field in 2020), more blitz and cover 1.

Last but not least we can analyze the rate of blitz and epa / play divided by below.

with this detail we can see how the teams reacted on the third down, where we find the Jets and 49ers in second and third place. The common thread between the two teams is called Robert Saleh, who from the defensive coordinator of San Francisco arrives in New York as the new head coach. He will be tasked with completely rebuilding the team after Hurricane Gase. He wouldn’t waste too many words for another dismal season for the Jets, led defensively by blitz-loving Gregg Williams, enough to play a zero blitz against a Hail Mary with 13 seconds left and a four-point lead to manage.
At Bay, the 49ers, on the other hand, had returned from their Super Bowl appearance the previous year, thanks to an amazing defense that saw the strong point down the line. In 2020 there was an increase in total blitzes and above all a massive resource on the third attempt, after conservative first attempts. The void left by Saleh is covered with an internal Demeco Ryans solution. The former DROY in 2006 will be able to continue along the path already traced, obviously bringing some personal news.

The focus will be primarily on the offensive end given the pick of the 5 quarterbacks in the first round. Despite this I think Changes in the coaching staff and some transfers can bring the same interest to the defensive phase.
News often brings unpredictability and uncertainty, but in these rough seas we have a very firm anchor to hold on to, the Ravens of Martindale will continue to bombard.